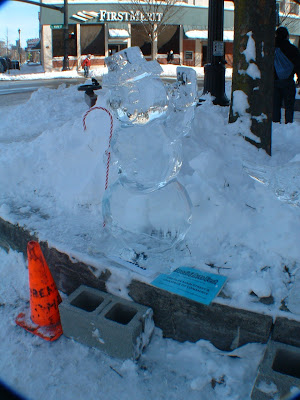 In an earlier post I mentioned that there will be a lot going on in Oberlin this month. First off, since the weather is cold and snowy, you still have time to visit the down town and see the three ice sculptures that were done on Saturday during the Ice Fest.

They may still be around for this weekend when you come to see the upcoming production, “Intimate Apparel” at Hall Auditorium on Thursday, Feb. 11; Friday, Feb. 12; and Saturday, Feb. 13. The play was written by Lynn Nottage and has won five national awards for best play. It is set in 1905 and tells the story of an African American seamstress who sews very fancy and sexy undergarments for the upper, wealthy ladies on 5th Ave. and also for the ‘under’ prostitute ladies of the streets. It is a play about self-discovery, about race and class in America, and about desire and hope for the future. Performance times are at 8:00 each night. Tickets are $8.00 for general public and $6.00 for Seniors.

And while you are setting up your schedule for the rest of February, just want to let you know that there will be a performance on Tuesday, February 23 at 7:30 P.M. by Ladysmith Black Mambazo. And this concert is FREE at Finney Chapel! This South African singing group has performed around the world in lively a cappella harmony. You may remember them from Paul Simon’s album, “Graceland.” They have sold more than seven million copies of more than 40 albums and have won three Grammy awards. Since it is a Tuesday night why not take a day off on Wed. and stay here at Hallauer House. We have rooms for Tuesday night but alas, no rooms for Valentine weekend for the “Intimate Apparel” performance. A special deal of $99.00 for the Union or Confederate Room is being offered for the Tuesday night performace of Ladysmith Black Mambazo. Just mention this Blog post!

And be sure to check out our ‘new, revised’ website! Let us know what you think!