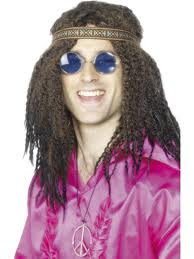 Okay, so you ask, who is Tommy Flowers and why is he in Oberlin and why should I care!

“Where Has Tommy Flowers Gone” is the new production coming to Hall Auditorium at Oberlin College this week. You should care because it is a hilarious flash back to the 60s “now-generation.” It is made up as a series of vignettes, and skits that portray the life and attitude of  Tommy Flowers who is an irrepressible cut-up, determined freeloader, and disenchanted rebel against society. In the course of his adventures he befriends a destitute old actor, acquires an over-sized sheep dog (his best friend), and finds love with a beautiful music student (whom he meets in the ladies’ room at Bloomingdale’s). But as Tommy moves from scene to scene, his bright red shopping bag at the ready for pilfering and his agile wit poised to hoodwink everyone in sight, we also glimpse the root causes of his alienation, from a complaining mother; to an unhappily married brother; to a former girlfriend who has settled for a suffocating domesticity; and to more rejection than acceptance. In the end, betrayed yet again, but still buoyantly defiant, Tommy devises his final rip off! To find out what that rip-off is, you will have to attend the performance! So make plans now for a quick get-away! Come to Oberlin early, explore our town, do some Christmas shopping, have dinner at one of our fine restaurants, take in the play, and then spend the night at Hallauer House B & B! We’ll keep the holiday lights on for you! Give us a call! You know you want to!


Dates for the Production: