One of the things that Hallauer House is noted for is our many and unusual antiques. With that said we want to introduce you to this one – 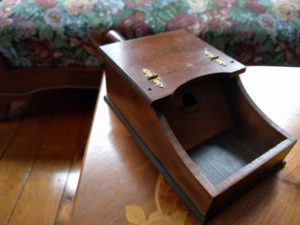 Do you know what it is? 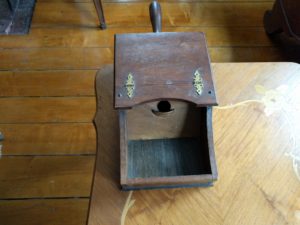 And last clue – How about now? 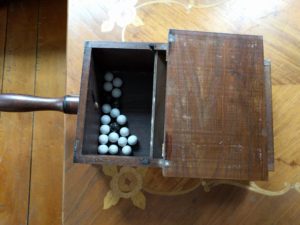 You are correct! It is a Blackball Box!

Have you ever heard of the term – You have been blackballed?

This Blackball Box was used for blackballing someone from being admitted into an organization or for voting against someone running for an office in that organization. It consists of a secret vote usually used in gentleman’s clubs, free masons, and fraternal orders where there is not an apparent winner in an election or where someone does not want you in their group. A large supply of black and white marbles are put out in a dish and when the vote is to be taken each person secretly goes up and selects either a white ball or a black ball, the white ball being a yes vote and the black ball being a no vote. Each member then goes up to the box and drops their marble in the hole so no one will see the color of the marble. After all have voted, the marbles are displayed. Many times just one black ball in the box will decide the fate of the person being considered for an office or for membership. And no one knows who dropped in the black balls! Thus the term ‘You have been blackballed’ or ‘you have lost the election.’ Things were pretty simple back in the days of the 1800’s! Wonder if we could go back to this in our present day elections?!

If this has caught your imagination and you want to read more about Blackballing check out what Wikipedia has to say and if you would like to see a Blackball box or some other unusual antiques you can do that when you come to stay at Hallauer House B & B! See you soon!