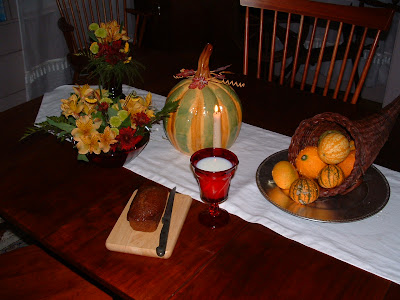 In honor of Fall I decided yesterday that I would make a Pumpkin Bread recipe for this weekends guests. And wouldn’t you know that last week I cut out from the Sunday paper just such a recipe! So, as all good ex-Home Ec. teachers do, I assembled the ingredients, preheated the oven, and began preparation. But this recipe used only 1 cup of pumpkin and I had a 30 oz. can. So instead of putting the leftover pumpkin in the refrigerator where it would probably be forgotten until it was ready for the compost, I decided to go ahead and adjust the recipe to accommodate the entire can. Thus, this required increasing the recipe times 4. No problem! My trusty math brained husband was close by so he shouted out the necessary increases for each ingredient and I diligently made the changes on paper.

Well increasing the pumpkin was easy – 8 ozs. changed to 32 oz. The spices went from 1/2 tsp. to 2 tsps. The water from 3/4 cup to 3 cups. Okay so far. But then I began wondering about the accurracy of this entire recipe! I needed to increase the brown sugar from 1 3/4 cup to 7 cups! Now, I’ve never made a recipe with 7 cups of brown sugar in it! Needless to say, I now am out of brown sugar! Had just enough! Then I added the increased amount of vegetable oil which amounted to 2 cups. By this time the mixture resembled a very dark bowl of spicey smelling liquidly goop! And I’m beginning to think that this is going to be a very expensive mistake! Then instead of the 2 eggs called for in the original recipe, I needed to add 8 eggs for the quadruple. Ok, now it really looks like dark brown, spicey, liquidy soup! Well, in for a penny, in for a pound! Might as well keep going and see what happens!

Next up was to add 7 cups of flour mixed with 4 tsp. of baking soda and 3 tsp. of salt. After mixing the dry ingredients just until blended, I found I still had a rather soupy mess! Well, I decided that I would just have to go ahead and fill the pans, bake the ‘bread’ and see what would happen and how it would taste. I had a muffin mix waiting in the wings that I would make for the guests just in case this recipe really flopped! Since we like to serve a mini loaf of bread to share between 2 guests, I decided to go ahead and bake this liquid batter in my mini loaf pans. And believe me, it was a liquid batter! Well, the original recipe said it would make 3 mini loaves so with the quadruple I figured I’d get 12 mini loaves (3 X 4 = 12, right?). I ended up with 20 mini loaves! Instead of a bread batter, I had more of a liquidly cake batter! Oh well. I had too much invested to deep six the entire mess, so I went ahead and baked all the loaves, expecting the worst and figuring that I would have a really messy oven to clean up once these things all overflowed! The baking time was supposed to be 50 minutes but I adjusted that to 40 min. and then if not done, I could continue baking.

They were done after the 40 min. and lo and behold, they did not over flow! They actually looked and smelled great! Well, the test is in the taste! Sliced one open. Smelled great! Sliced more like cake than bread but at least it didn’t crumble apart! Joe took a bite. I took a bite. Great taste! Great texture! Great aroma! Can you believe! I almost threw the entire mess away! Now I have 15 loaves of cake/bread in the freezer. We used 5 already! The five guests this morning did not leave any leftovers and gave their stamp of approval. So, goes to show – don’t jump to conclusions. Follow through, keep going, and see what happens! 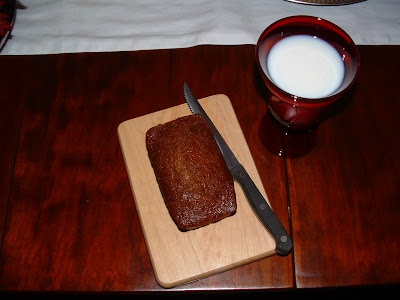 So here is the ORIGINAL RECIPE! Give it a try and let me know what the batter looked like, how it baked up, and how it tasted. If you have another Pumpking Bread recipe you’d like to share, email and let me know.

1. Preheat oven to 350 degrees
2. Heat pumpkin, and spices in a small pan over medium heat until steamy, stirring continuously. Cook until pumpkin is stiff and starts to stick to the pan bottom, about 3 minutes.
3. Transfer pumpkin to a bowl and stir in 3/4 cup water, then brown sugar, then oil, then eggs and blend until smooth.
4. In a separate bowl, whisk together remaining dry ingredients, then fold into the pumpkin mixture until just combined.
5. Scrape batter into 3 greased mini loaf pans or 1 9-inch loaf pan.
6. Bake until firm and golden brown, about 50 minutes for mini loaves and about 70 minutes for large loaf.
7. Let bread stand for a few minutes. Turn onto a wire rack and cool to room temperature.
Recipe freezes well.