A classic car is a piece of history. And two classic cars rest here at Hallauer House Bed and Breakfast! One has a nice home in the warm and toasty garage! The other sits in the trees covered with a cold and worn tarp. So let me tell you about the take of these two classic cars!

The tale begins in 1985 in Lorain when Joe stumbled upon a 1956 Buick Roadmaster car sitting in a yard with a “For Sale” sign in the window. Curious, he approached the house where the owner appeared ready with answers to all of his questions.  The car, as it turns out, was found in an old barn in Virginia and then brought back north. And yes, he said, it is in good running condition.

So Joe comes home all excited about this great car he’s found and says the guy only wants $600.00! Now Joe’s fascination with the 1956 Buick dates back to his youth when some comedian joked ‘that when you got run over by a Buick you really got run over!” So that, and the fact that he really likes the art deco style of the Buick, led to his desire to own this ‘beautiful’ classic car!

On the drive home the car made a lot of strange sounds so we named it “The Clunk!” To our dismay it did not fit in the garage so it was parked outside covered with a tarp. Our plan was to eventually have ‘The Clunk’ restored it to it’s original luster! In the meantime though it became a great place for the preschool children to play. I believe they ‘drove’ it to California several times over the years!

In 1992 we moved from Lorain to Oberlin and of course we had to bring ‘The Clunk’ since it was now a part of the family. But now the classic car we had such great plans for could not be driven on its own so AAA came and escorted her to her new home.

In 1995 we were able to start the long awaited restoration. The mechanic we hired rebuilt the engine and transmission.but then after a few years he backed out of the job. We were beginning to wonder if ‘The Clunk’ would ever find glory again. We brought her back home and again protected her with a brand new tarp. It wasn’t until 2001 that we found another mechanic willing to complete the job. He assured us that he could restore the car and complete the job. After 5 years and very little progress we brought ‘The Clunk’ came home again but sadly this time it was in pieces. We packed the car parts into the shed but the shell of the car had to remain in the trees, covered but not forgotten.

Joe was really disappointed since now the cost of restoration was almost out of reach. Redoing the chrome alone would be $20,000 we were told! But he still wanted a classic car, and he still wanted a 1956 Buick Roadmaster. As luck would have it he got his wish! One day while on Ebay we found it! A 1956 Buick Super was listed in excellent condition with a price tag lower than the cost of restoring ‘The Clunk!’  We were told that the original owner returned to England leaving the car behind in a storage facility in Canada some 45 years ago. It was finally being sold and we became it’s second owner!

There was just one problem since ‘The Super’ was in Canada and driving it through customs could be difficult. Better to have it shipped to Buffalo and then drive it back to Oberlin. And we were told it could be driven all the way to California.

What could go wrong?

On May 10, 2008 our ‘new’ car arrived in Buffalo. Our youngest daughter, Emily, was home on leave from the Coast Guard so she agreed to accompany Joe on the journey to Buffalo. They left early in the morning on a one way bus trip to Buffalo. That is a 3 1/2 hour car ride but a 5 1/2 hour bus ride. During one stop the bus was boarded by ICE agents!. They both decided that was their first and last bus ride!

After the horrendous bus ride they were anxious to pick up the classic car and get on the road home. The Super was ready for them when they arrived. After all the time in storage the first thought was will it really run? Then with a turn of the key it started right up and purred like a kitten! So off they went. But they soon discovered it wasn’t the running that was a problem, it was the stopping! No brakes! So they made their way to the first garage. After getting brake fluid, oil, and air for the tires they set off and headed for I 90 and home. By this time they knew that this car would not have made it to California!

Then just past Erie, PA a tire blew out! When AAA arrived on the scene the driver said he would need to bring out a new tire. This was good for Emily since she needed a pit stop so he offered her a ride. After the tire was mounted they headed back to the freeway hoping for no other problems. Then the rain came and they discovered the wipers did not work! The car ride home turned out to be longer than the bus ride to Buffalo!. 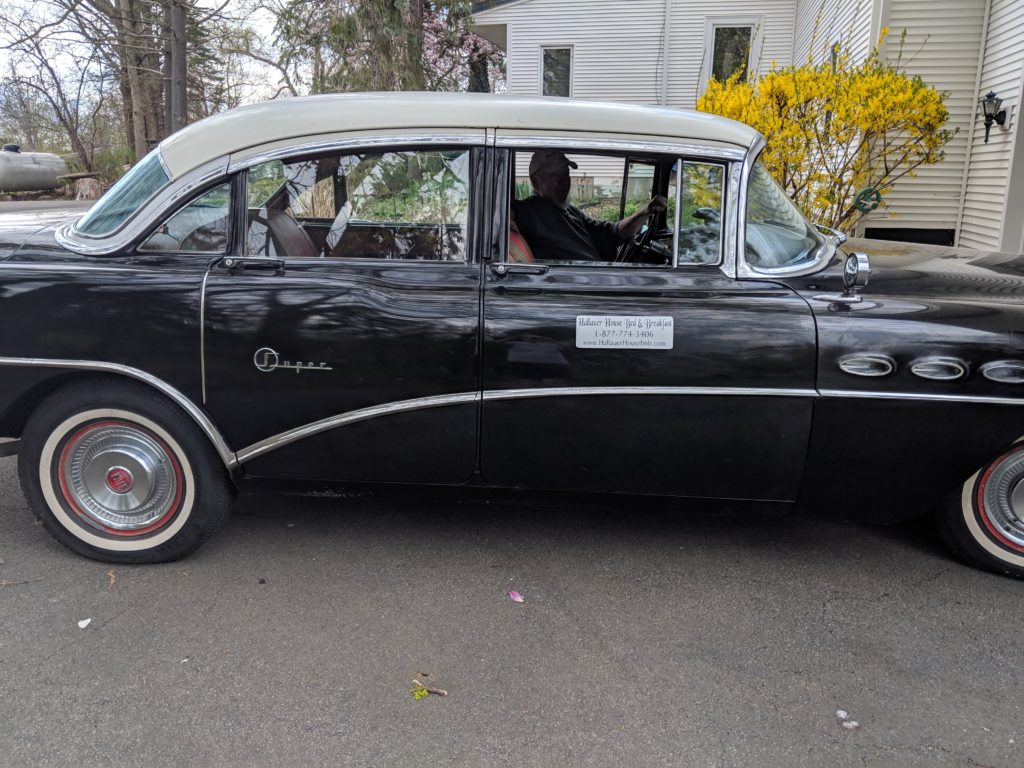 Our new classic car is all original and really is in excellent shape! The wipers now work. The brakes work and it now has it’s home in the garage. Joe has entered it in several car shows and we use it as advertising for the B & B. My favorite thing is the back seat. There is so much room that you can stretch your legs out and not touch the front seats! I think 4 people could sit back there and still be comfortable!

Besides the art deco design this 1956 Buick Super also has everything power:

The Moral of the Tale

During the pandemic shut down we would sometimes drive around town to cheer people up. From the smiles and waves we would get it must have worked!

As for ‘The Clunk,’ she sits alone waiting for a rebirth that I’m not sure will ever come.

The Clunk – Our 1st Classic Car

So if you need cheering up or you just want to experience what it ‘s like to ride in a classic car Joe would love to give you a ride in his 1956 Buick Super! Just tell him ! told him too! Offer only good for registered guests! So BOOK NOW! 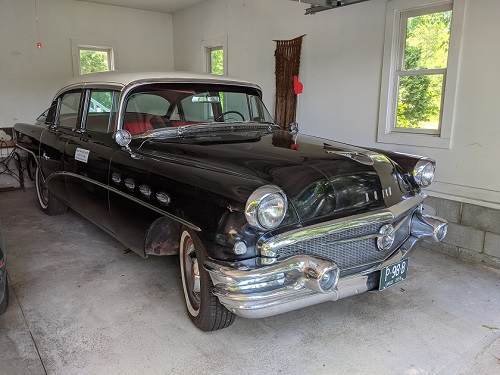 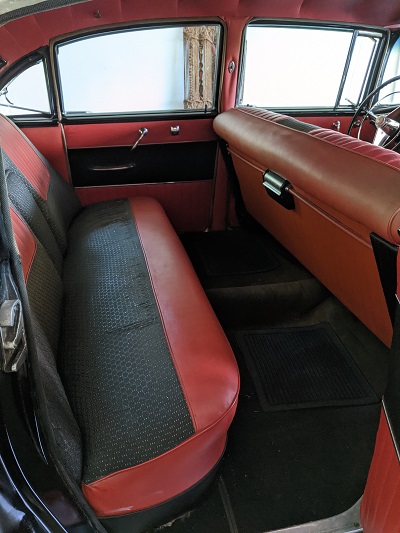 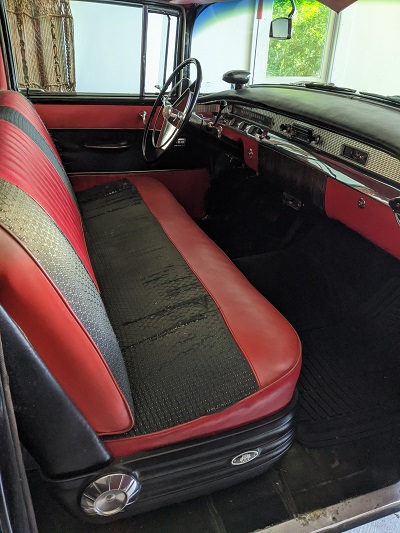