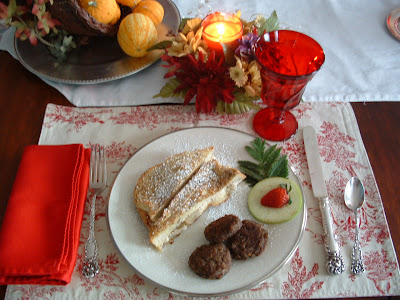 With Thanksgiving less than a week away, you may be wondering what to serve the crowd for breakfast or brunch before the big turkey dinner. Let us make a suggestion!
Our Thanksgiving breakfast for six guests will consist of the following bountiful feast foods:

On a previous post, I shared my experience making the Pumpkin Bread recipe, so now I’ll take you through the process of making the Apple-Cream Cheese Stuffed French Toast. It has been voted a winner among guests who have enjoyed it at breakfast here at the B & B.

1. Mix the first four Filling ingredients together until well combined. Fold in the apple pie filling.
2. Spread cream cheese mixture over 10 slices of the bread and top with the other 10 slices, forming a sandwich.
3. Place bread sandwiches in a large baking pan that has been sprayed with non-stick spray.
4. Combine the eggs, half and half, milk, vanilla, cinnamon, and nutmeg. Beat until well mixed.
5. Slowly pour the egg mixture over the top of the sandwiches until all the bread is soaked.
6. Cover and refrigerate overnight.
7. Bake at 350 degrees covered for approximately 40 minutes.
8. Then uncover and bake for an additional 20 minutes.
9. Let stand 10 minutes before cutting and serving.
10. Sprinkle with confectioners’ sugar and toasted almonds. Serve with warm maple syrup. (We use Ohio Maple since it’s the best!)

As you can see, this recipe can be made the night before so it’ preparation won’t interfer with the turkey prep! So gather the ingredients and prepare for a great breakfast. You won’t be disappointed! 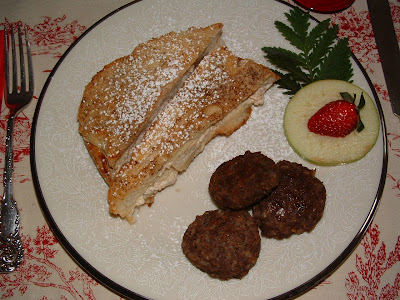