This has been a great summer for bike riding! And we have been an oasis for many riders as they stop overnight at Hallauer House to rest, relax, and cool off!

The first riders that we welcomed for a night in June, Todd and Bill, were riding on the “Freedom Tour.” The purpose of their “Freedom Tour” was to bike 1700 miles in 30 days (from Mobile, Alabama to their home in Western New York, following the Adventure Cycling’s Underground Railroad Route). Their goal was to raise awareness and resources to help abolish Human Trafficking – the Modern Day Slavery and to honor the history of the Underground Railroad by riding this particular route to help free today’s slaves. 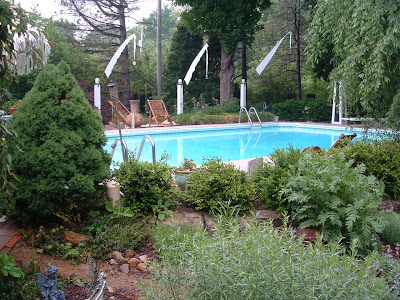 They arrived in mid afternoon and their first visit was to the swimming pool! At breakfast we learned about things that happened on their journey and their committment to the abolition of modern day slavery.

Our second bike rider, Frank, was traveling solo from Illinois to New York City. He called about accommodations when he stopped for pizza and when he arrived he spotted the pool and within 5 minutes guess where he went! You got it! Straight to the pool! It was 90 degrees and boy was he a happy camper!

Our third traveling bike riders, John and Pam, started in Kent, Ohio and were peddling down to Smithville, near Wooster. We were their second stop on a three day trip, and again it was hot and humid and their first stop – the pool!! They also took advantage of the dry heat sauna and the whirlpool tub but after a 50 mile bike ride, I couldn’t talk them into trying out the treadmill or elliptical!

Our fourth biking couple, John and Raphael, stopped just last night, finishing up their last leg on the Underground Railroad Bike Tour. They joined the tour in Cincinnati and ended it here in Oberlin. But they arrived late and regretted that they were too tired to make it out to the pool.

Other couples have visited Oberlin and stayed with us so that they could bike on our Rails to Trails bike path. Oberlin is about half way so if you jump on the trail here and go east or west and then back to Oberlin, you will have gone approximately 13 miles. The entire trail is 13 miles in lenth so you could start and finish in Elyria or Kipton and rack up 26 miles total!

There is still a lot of summer left so if you want to have an adventure then get out the bike, put on the helmet, fill up on water and pedal on over to Oberlin. Check out the local Back Roads and Beaches tour also. And if you are planning a tour with Adventure Cycling, plan a stop with us. When it’s hot and humid and you can’t pedal another mile, come and cool off in the pool! You’ll be glad you did!