Axe throwing is the NEW thing! At least I assumed that it was relatively new. But I have since learned that it has been considered a sport since 2006. It seems that a group of friends in Canada were responsible for this new phenomenon.

So picture yourself with a group of friends camping in the woods with no WIFI. Boredom sets in. An axe is planted in a log by your feet.

The beginning of axe throwing!

So you pick it up and proceed to throw it at a stump. Then everyone in the group wants a turn to throw at the target. Pretty soon someone sets up a bulls eye and the new sport of axe throwing has begun! One of those friends, Matt Wilson, went home, set up a target in his back yard and invited other friends over to throw an axe. Pretty soon more friends joined in the fun and eventually teams were formed. Then leagues were formed and businesses were created.

Why am I writing about axe throwing, you may be asking.

Well, yesterday Joe and I had the pleasure of participating in this sport of axe throwing thanks to our wonderful children who arranged it! 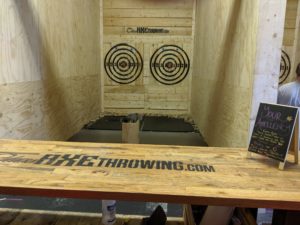 So after we arrived at our destination we filled out the waiver forms and then proceeded to the throwing arena where we divided into 2 teams.  After we all chose an ‘axey’ alias name, I was number 3 Lizzy Borden, 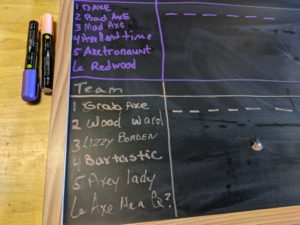 we were given instruction on just how to properly throw an axe at a target. Everyone in our group of twelve got seven practice throws using both hands and then just one hand. After that the competition began in earnest! There were two team challenges and one individual challenge which determined the overall grand champion winner. But before I announce the winner check out some active pictures of the Hallauer House fans! 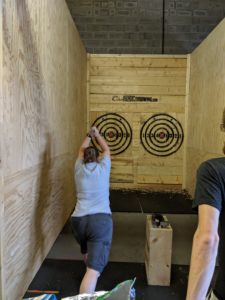 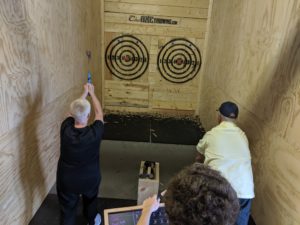 The Innkeepers with an axe! 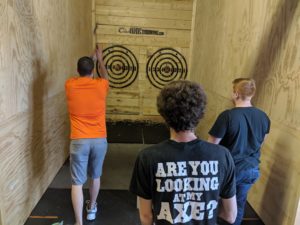 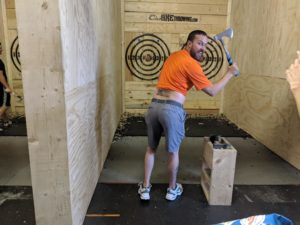 And now we present the grand champion for the Hallauer House Fans! It is none other than Axe Me a Question! Congratulations Axe Me!!! You deserve it!

Class Axe is also home to The Escape Room but we will have to blog about that at a different time after we give it a try. For now be sure to check out our Attraction Page for other things to do in northeast Ohio and the Oberlin area. If you want to join tn the fun, and maybe even join a league, then contact  Cleveland Class Axe.