Many people who visit with us are unaware that there is a Frank Lloyd Wright House in Oberlin! It is not quite as famous as Fallingwater in Pennsylvania, but it is the first of nine Usonian homes built in Ohio. Frank Lloyd Wright designed the home for Charles and Margaret Weltzheimer in 1947, a year after they moved to Oberlin. Their starting budget was $15,000 but two years later that price ballooned to upwards of $50,000. Wright never visited the site, leaving the supervision and construction of the project up to another firm. 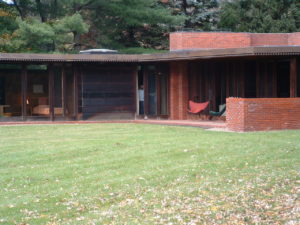 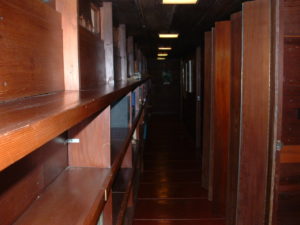 This is a typical Usonian style house. It has an “L” shaped floor plan, a flat roof with large overhangs, and a carport. The house is divided into two parts. The public area has the living room, dining, room, and kitchen. The private wing is where the bedrooms and bathroom are located.  When children visit the bathroom they get a great kick out of the bidet, most of them having never seen one or know what they are for! They find it very funny and something they rarely forget! We found the hallway leading to the private wing to be very dark as it has dark wood paneling so definitely need some good lighting. 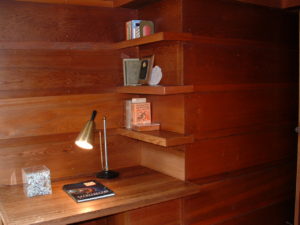 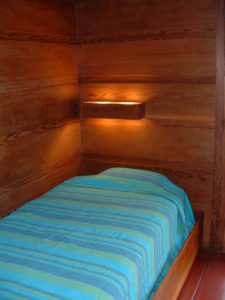 The floors are concrete grid patterned slabs with in bedded radiant heat. There is a masonry fireplace, board and batten walls holding the simple built-in furniture which is made of plywood. I really like the tall glass walls and doors in the living room opening to the outside. And yes, all of the bedrooms have their own exterior door but no windows.

The Weltzheimer house is, however, unusual in a number of respects. It is the only Usonian built outside of California that used redwood in its construction. There are unusually elaborate curved motifs in the panels in the high section of wall where windows are placed above eye level. The purpose is to admit light, fresh air, or both. Wright himself also created a detailed landscape plan for the property which has long been let go. 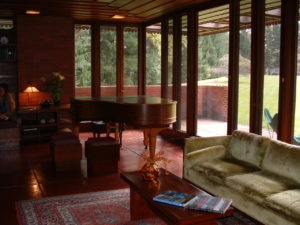 There are two oddities in the house – little cannonballs on the eves around the roof. Wright never used such ornamentation so this may be the only house to have such a decoration. In the picture to the left you can see them at the bottom edge of the roof. The family crest tile is the other oddity.The tile was the Weltzheimer family crest and they wanted it installed in the fireplace. Frank Lloyd would not allow any works but his own in his buildings so the builder made it so the tile could be removed and the masonry piece inserted in its place in case Mr. Wright would by chance visit them. We do not think he ever did.

The house fell on hard times in the 60’s with various owners changing and adding things like paint, formica counter tops and mahogany cupboards in the kitchen, trees too close to the house, and many other things that Frank Lloyd would not have approved. Then in 1968 Ellen Johnson, a Professor at Oberlin College bought the house and for 25 years worked to restore it to its past glory. Before she died in 1992 she transferred ownership to Oberlin College. Oberlin Museum of Art now looks over the house. It is open for tours on the first and third Sundays of the month but is closed from December thru February. The house is now referred to as the Weltzheimer/Johnson House. So put this house down as a must see the next time you are in Oberlin but check the dates to make sure that it is open for your visit. And while you are in Oberlin make your plans to stay at Hallauer House Bed & Breakfast. Joe, our historian, will give you the scoop on all things historical, including the Frank Lloyd Wright house.