Is Hallauer House really a haunted B & B? 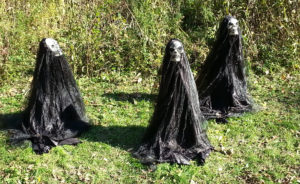 Hallauer House B & B Ghosts?

Some of our guests and family members have asked this question over the years! A few guests have heard strange noises, a few have seen shadows, and a few have encountered objects being moved! Several years ago Joe wrote one of our BLOG articles with some great detail about his experience meeting ‘Francis‘ in the Union Room. Be sure to read that article first before continuing here because this post is an update on things that have occurred since then, one being just last night!

Haunting this morning at the B & B!

The haunted rocker used by the B & B ghost!

This morning Connie, one of our guests, came down for breakfast and asked right away what was above her room. I told her that the attic was on top of the Union and Confederate Rooms. So she gave me a weird look and began her story. After wakening up around 2:30 A.M. she got out of bed, walked around a bit, and then sat down on the sofa to relax before returning to bed. It was then in the stillness that she heard it. She described the sound as if someone was in a rocking chair going back and forth on a wooden floor. A heavy sound when the rocker went forward and a lighter sound when it went backwards. Right away i told her that there was no rocker in the attic. We both got chills! Then she described a sound as if it came from a small child like a cooing noise. She, at first, shrugged off her thoughts and figured it was the AC coming on making the noise but the sound continued. She woke her husband up to listen but then the rocking stopped! The sounds then ended but it was quite a while before she got back to sleep! What do you think?

Haunting in the pool at the B & B! 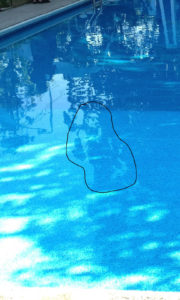 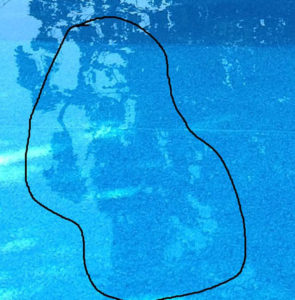 A close up of our haunted pool ghost

The next occurrence has a picture with it so you can be the judge!  What you see to the left is a picture one of our past guests took. She outlined the figure that she saw in the pool and sent it to us. She said when she took the picture there was no one else around and there was nothing that would have made a shadow like what is in the outline. So we enlarged the picture and that is what you see on the right. On inspection we think this is a man floating on what looks like a chair float. He has a mustache and I can make out his ears and eyes. What do you see?

Haunting in the Confederate Room at the B & B!

There is no explanation for this next story! One of our female guests, I wish I could remember her name, came down for breakfast, filled up her coffee cup and joined the other guests at the table. She then asked her husband why he moved her sandals. He looked at her and said that he did not move her shoes! Then she told her story. She took off her sandals without unbuckling them and put them beside the bed so she could slip into them in the morning. But when she got up, she found the sandals on the other side of the room and they were unbuckled!  Her husband again swore that he had nothing to do with it! That is the first haunted occurrence in the Confederate Room! What do you think?

Haunting in the Union Room at the B & B!

The Union Room seems to have the most spirit energy. A knocking sound, not at the door but on the wall above the bed awakened another guest who was staying alone in that same room! She felt the spirit of her son, who had passed away just a few months prior to her visit with us. He was telling her that he was okay and that she would be okay too. She said she fell back asleep and awoke in the morning with a much more peaceful feeling.

There is much debate among our guests that we have had about spirits and haunted places. Some believe and some do not. Do you believe?

The Mansfield Reformatory for haunted tours 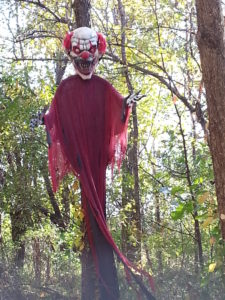 Cedar Point Hallow Weekends just 40 minutes from the B & B

The most famous haunted location in Ohio is probably the Mansfield Reformatory where the movie Shawshank Redemption was filmed. Beginning October 19 through Nov. 5 they will be doing the Halloween tour, one of the most popular and scariest Halloween events around! There is also Cedar Point’s Hallow Weekends, fun for little ones and scary for the older ones!

But my one very personal haunting experience occurred after a visit to Key West. FL. We visited the Fort East Martello Museum, where we met Robert, the Doll. While on one of the Ghost tours we heard the story about Robert and I was excited to meet him in person at the Museum. I will not go into the details here about Robert but you can read the entire legend here.

Robert sits in his rocking chair with his stuffed animal in a glass room at the Museum. And according to his legend he demands that you ask his permission if you want to take his picture. If you do not then bad things will happen to you in the future. Well, I took out my camera, and my daughter says to me to be sure to ask for permission or something bad will happen in the future. I laughed and said I do not believe all that nonsense! So against Emily’s advise I took his picture without his permission. A few days after returning home to Oberlin and after that I sat down to do work on the computer and it was totally screwed up! I mean screwed up so bad I had to take it to the repair shop! When I called my daughter she said “I told you to ask permission before taking his picture!”

So lesson learned! I believe! Do you believe?